The National Research Institute of Cultural Heritage is using a geophysical method in order to investigate the internal structure of the underground area in connection with an investigation into buried cultural heritages.


What is the Archaeological Prospection?

Archaeological Prospection is a field that supports the survey and excavation of buried cultural relics through geophysical prospecting techniques as well as techniques drawn from electronic engineering and computer science.

Subsurface prospecting, prior to the excavation of buried cultural relics, can help determine the precise location of the target cultural relics, their size and their pattern of distribution by displaying the information through imaging techniques. These scientific data are extremely useful for effective planning of archaeological excavations.

A GPR survey images the subsurface by transmitting electromagnetic radiation to a subsurface area and measuring the difference in amplitude between the initial radar pulse and the return pulse and its time of arrival. This survey technique is extremely useful for imaging buried cultural properties such as the interior of an ancient tumulus, building sites, shell mounds or kilns.

Gyeongju was the royal capital of Silla for nearly ten centuries (57 B.C. - 935 A.D.). The inner part of the royal capital, surrounded by fortified walls, was called Wolseong. Extending 1,841m in circumference, 860m east to west, and 260m north to south, Wolseong enclosed an area of 112,500m2 (About 34,000 pyeong). Excavations in the area presumed to be the former site of a moat began in the 1980s. GPR survey techniques are used for protected areas inside the fortress.

A GPR survey identified seven square building sites, most of them about three by four kan (kan is a traditional unit equal to the space between two columns) and a row of wall foundation stones. Toward the south side, a series of cornerstones, surrounding another building site in a rectangular shape, were discovered.

An area presumed to have been the site of the entrance to the fortified city has been identified here. The area was enclosed by walls, extending from a low-rising section of the fortress wall. A building site, presumably that of a defense structure, has also been discovered. The two building sites identified near Seokbingo, the ice storage of the royal house, appear to have been connected with seven building units that were once situated in Section 1.

A folium over 40m wide has been identified in this section of Wolseong. On the vertical sectional view by GPR imaging, the shape appears close to that of shallow dish. Similar to a former both in shape and size to a pond site discovered through surface survey inside the fortified city, situated toward the west side, this area is presumed to have also been the site of a shallow pond, 0.5m deep.

In this area, located at the eastern extremity of the fortification, five large cornerstones, exposed at the surface, have been found. The building site proved to be far larger than estimated through GPR survey and was surrounded by several other building sites. The rows of stones present along the line at which the slanted plane of the fortress walls and the level ground meet hint at the possible existence of a drainage duct.

Electrical resistivity survey measures the resistance of the subsurface to the flow of an electrical current, which varies depending on the water content, dissolved ion concentration, soil components such as clay, sand and gravel, and degree of efflorescence. This technique is highly effective for determining the subsurface stratification pattern and soil characteristics and may be used to investigate tombs, building sites, kiln sites and shell mound sites without digging.

Electrode arrays are the most accurate method of imaging subsurface soil structures and are, for this reason, widely used for assessing archaeological sites and geological surveys. This image shows the soil stratification below ground immediately north of the stone pagoda at the Gameunsa Temple site in Gyeongju. The section 2m below the ground surface, with a high resistivity value, appears to have been a soil layer, reinforced for construction of a building. The other section, situated 7m below the surface, also has a high resistivity value and is likely to be a rock stratum.

Interpretation of Vertical Section of a Subsurface Area

The electrode array method is a highly effective technique for surveying archaeological remains, as it is possible to obtain good results even with low electric currents, which permit easy movement of electrodes, and probe the subsurface at any depth without drilling or digging. This Iron-Age dwelling site, in the shape of the Chinese character " 呂 " was surveyed with precision using the electrode array technique. The layers with a high level of resistivity are well-reinforced compact soil layers.

Magnetic survey is an especially effective method to employ on archaeological sites where the iron content of the soil was modified by human activities, or the soil acquired magnetism due to the recurrent use of fire. This method is optimally suited for kiln sites, fireplaces and stoves, outdoor fireplace sites and iron-making sites, among others.

Scores of ancient kiln sites have been discovered in the archaeological site at Mulcheon-ri, Songok-dong, Gyeongju, within an area slated for a racetrack development project. The magnetic field activity of the site was measured using a proton precession magnetometer, and several dipoles were identified. As a general rule, the magnetic field strength is higher at the entrance point of a fireplace, due to the higher temperature, and dipoles are also frequently formed there.

The Archaeological Studies Division is digitally recording and collecting information of Cultural Heritage utilizing unmanned multicopters. 3D digital terrain model production and terrain analyses are conducted by applying aerial photogrammetry and the cultural resources for the public is being enriched through generation of 360° panoramic images, which are available online on 『Cultural Heritage 360』. 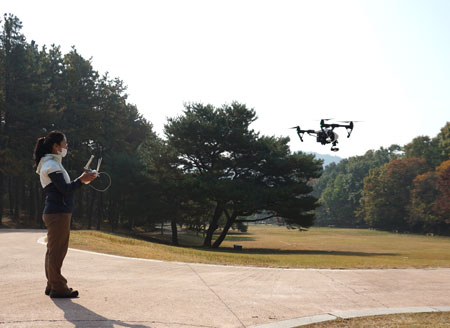 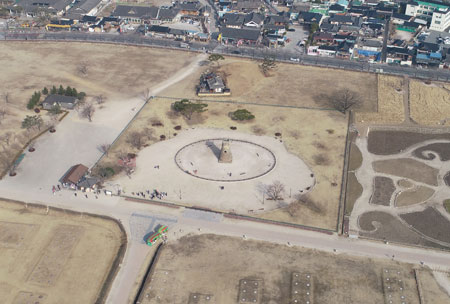 Aerial photograph of the Archaeological Area in Eastern Gyeongju 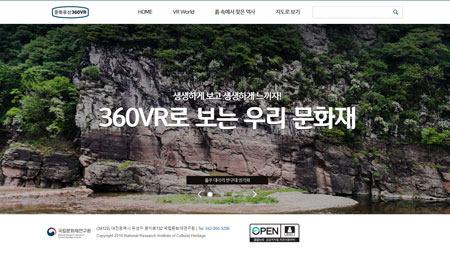